Bryse and I had a chance to check out this busy intersection a few weeks ago and were impressed with the amount of culinary options available.

Not a place for quiet reflection, the intersection is constantly busy with traffic whizzing by and people going about their business. Sitting in the heaving Sok San Restaurant for our initial meal of the night, we could tell this was a great spot to experience a bit of local flavor.

We only had a couple of dishes at Sok San but they were both excellent and quite cheap. It’s probably best to go with a larger group to get an sampling of the extensive menu.

After our meal and a few beers at Sok San, we headed south on Street 51 to a set of barbecue meat restaurants that looked promising. They did not disappoint.

Meat on a stick

Not much variety but who cares when there’s meat on a stick. You get grilled pork or a grilled pork sausage, a spicy sweet mango salad side and a baguette. All for the cheap price of 1,500 riel per skewer.

Grilled meat with some mango salad

We were a bit shocked with the baguette which we thought was slathered with butter but was actually spread with honey.

A baguette slathered with honey

All in all a nice little find if you are interested in a cheap snack.

Next we headed off to Street 136 just east of Street 51 where a bunch of fruit shake and sandwich places dot the sidewalk.

Pate and shake stalls on Street 136

We didn’t get the shakes as I was interested in the sandwiches. I have been searching Phnom Penh for a great sandwich place and was hoping these places would deliver.

Preparing a pate dish on Street 136

Less like sandwiches and more like a pate dish with a baguette on the side, I can’t really fault the quality of the food as it was quite tasty. I just kinda hoped for a banh mi styled sandwich. The pate was nice and flavorful and the pickles offered underneath were nice and crunchy. 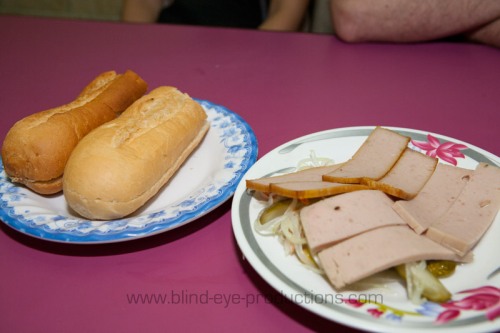 So there you have it. Not really a review but more like an overview of the different culinary options that dot the area around Street 51 and 136.

This is part of a set of reviews taken over a few days in which we gorged ourselves silly at the numerous Szechuan Chinese restaurants located near Central Market. The street is 136 and the best landmark I can give is they are just east of the KFC on Monivong. I have placed a map at the bottom of the review with the street highlighted in red.

I went to this restaurant years ago when it was known as Peking Canteen. I remember it being a great place for cheap eats and a favorite of some of old Cambodia Daily crew. I guess they dropped the Canteen and put added Restaurant to give it a bit more class. I don’t actually see the big difference as the interior of the place hasn’t changed since I was there last. 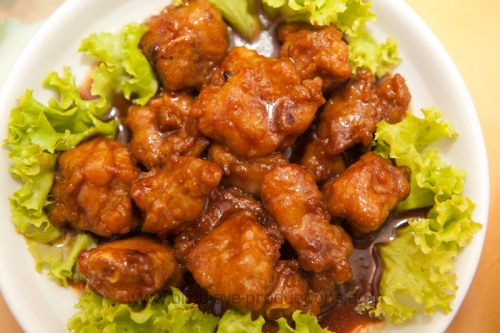 The Sweet and Sour Pork Spareribs were great with a not too sweet sauce that covered battered pieces of ribs. Also a plus was that the ribs weren’t too bony and had lots of meat to munch on. 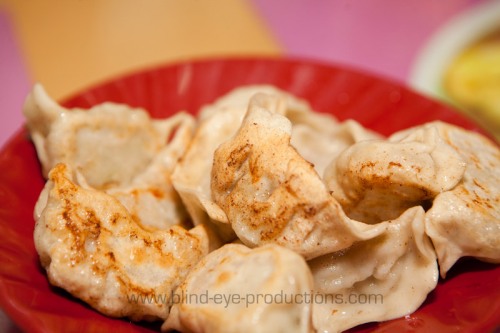 The Fried Dumplings were served on a pretty non-descript red plastic dish and I hate to admit that the dish reflected the taste of it. A pretty typical affair with a bit more meat to spring onion mix being the only notable aspect.

Lastly, we had the Noodles in Special Sauce. I don’t know what was so special about the sauce as it was pretty horrible. It just looked like a bowl of wet noodles. I don’t know how they were able to do this but it managed to look wet but have the consistency of chalk when eaten. Definitely the worst dish I’ve sampled so far on the monster review.

Order this dish at your own risk.

This review should be preceded by saying this was the fourth, yes 4th, place we tried that day and I was pretty much entering into a food coma.  The dumplings were fine.  Not the best of the day but not bad. 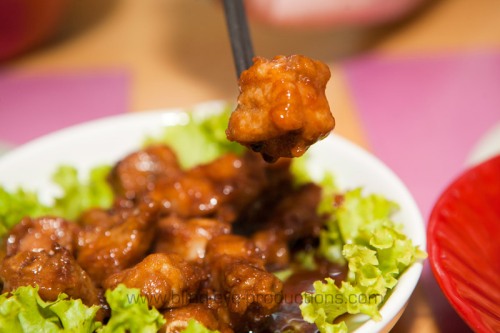 The spareribs were nice.  Great sauce, and a decent amount of meat for each bite.   The noodles with special sauce were not even worth mentioning.  While falling into a food coma, I wasn’t interested in exploring the more of the menu but if they do have peking duck, I would try this spot again for dumplings and duck.

This is part of a set of reviews taken over a few days in which we gorged ourselves silly at the numerous Szechuan Chinese restaurants located near Central Market. The street is 136 and the best landmark I can give is they are just east of the KFC on Monivong. I have placed a map at the bottom of the review with the street highlighted in red. 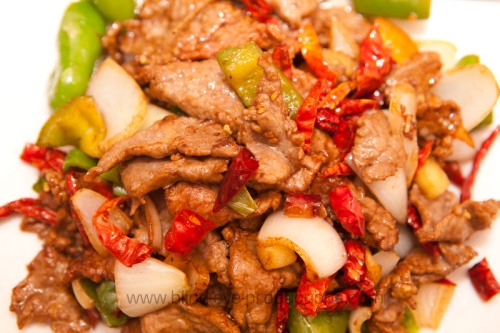 Shan Dong was the next on the list to try and I found it to be quite the same in terms of interiors from the rest of the restaurant row.

Usually when you sit down at these places, the waitress will put down the generic small plate, bowl for soup, a saucer for dipping sauce, soup spoon and chopsticks. Shan Dong elevates it a bit by offering some peanuts and a mouth scorching side of Kim Chi.

The duck soup was rich with the flavor of the duck prominent with each bite. The bok choy was cooked al dente and added a greatly appreciated crunchy texture to the softer noodles. I also appreciated that it the fattiness of the duck was controlled and not overpowering. As a whole, it was a very solid dish that I would probably order again.

The Spicy Fried Beef was next. Green peppers, onion, ginger, and a whole bunch of chilies were stir fried up with some beef in a flavorful soy sauce. A pretty good dish but was a bit generic for my tastes.

As for the Dumplings; well, they were very normal but tasted great when dipped in some soy and chili.

As a whole, Shan Dong falls in the middle of the restaurants we have been to. The duck soup was definitely my favorite with the other two dishes solid but nothing too impressive to write home about.

The duck soup was delicious.  Not overly flavorful but it smelled like eating a bowl of duck gravy … which is making my mouth water thinking about it.  And the duck meat itself was great. 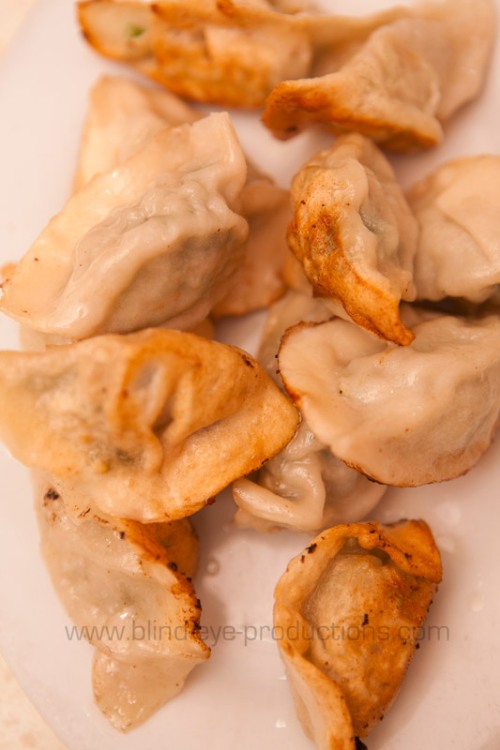 The dumplings were not stand out but pretty tasty.

I really liked the fried beef.  The stir fried veggies were really nice and the beef was surprisingly tender.  But for all of the red chili peppers mixed in, it really wasn’t that spicy which was a bit strange.

This is part of a set of reviews taken over a few days in which we gorged ourselves silly at the numerous Szechuan Chinese restaurants located near Central Market. The street is 136 and the best landmark I can give is they are just east of the KFC on Monivong. I have placed a map at the bottom of the review with the street highlighted in red

This restaurant lives up to it’s name and makes hand pulled noodles to order. The restaurant itself was pretty hot temperature wise as they didn’t turn on the air conditioning units until we walked in. Considering all the restaurants on the street keep their units on during lunchtime, it’s definitely something to take in consideration during the hot season.

Over the cooked noodles, there was a spicy hoisin based sauce which had pork, water chesnuts, chili, and onion. It was garnished with a large amount of julienned carrots and cucumber. I didn’t think I would care for the dish at first glance but I really enjoyed the flavors. It reminded me of Vietnamese dish Bun Thit Nuong which is never a bad thing. 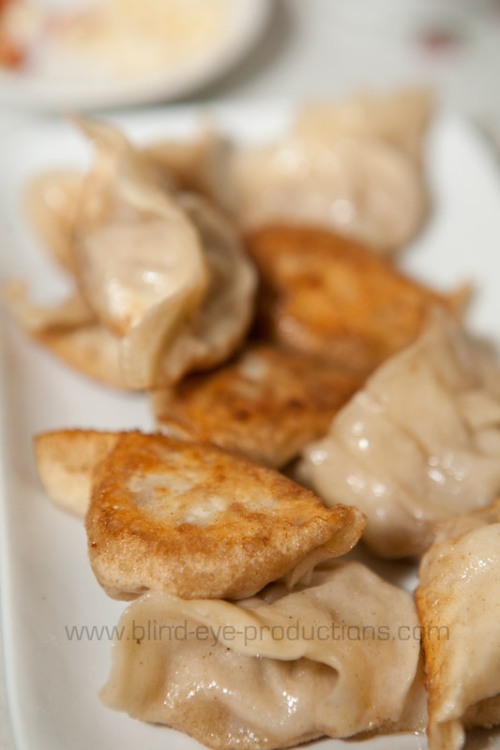 The Fried Dumplings were well formed and had a more than generous portion of meat to onion.

The Fried Cake with Onions was kinda like a chinese naan but deep fried. It was greasy mess that I couldn’t stop eating and tasted even better dipped in soy sauce.

All in all, the Chinese Pull Noodle Restaurant has some great food.  Let’s hope they turn on the air conditioning before people arrive.  — Vinh

One bite of these fried dumplings and Chinese Pull Noodle shot to the top of my list of spots on this street; if not in Phnom Penh.  Maybe it was the disappointment of the boiled dumplings at the last place or maybe it was the unusually generous portion of pork in these guys but damn, these things are good.

The noodles were fine, a little weird to have fresh vegetables in a hot noodle dish but it was interesting.  But between the dumplings and the spring onion cakes, I was very happy about this lunch.  So much so that I went back for dinner a few days later.  Which was great food wise but there was a table next to us of hammered Chinese guys yelling literally the entire time which got to be a bit much by the end of our meal.  But nothing that will make me hesitate to go back.  Two thumbs up sauces for Chinese Pull Noodle.  — Bryse